This post was originally written by Alex Schwartz, co-founder and CEO of absurd:joy, on November 22, 2020.

Alex here! absurd:joy is an all-remote team of humans working together to invent all sorts of interactive and immersive and playful things. So, in order to do all of that, we need all the methods to communicate and collaborate effectively.

There are tons of resources describing various solutions for effective remote team collaboration, and in our case, we are currently using Zoom (flat-screen vid chat), PlasticSCM (source control), Trello (task tracking), Notion (wiki and oh so much more), and a few other pieces of tech here and there. I’m sure we could write a full post on each of these pieces of tech but today I want to dive into a system that I’ve dubbed “Numbers”. 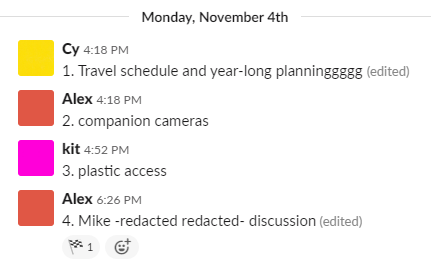 So What is It?

Numbers is a “To Talk About List” written in a private text channel between 2 or more people. It is not a “To Do List”. Said another way, it’s a method of tracking concepts that need to be discussed for a set of two or more humans.

Wait, what? This is SO. DAMN. SIMPLE.

Yes. This might sound pretty straightforward but I’ve described this to so many colleagues in the tech/art/design space over the years and their eyes have lit up in unimaginable ways. Numbers has caught on among our close friends in such a gangbusters way that this blog post is a long time coming. It’s time to share the methodology with the world. Let’s dive in.

There are many ways to use Numbers so I’ll use a work example first and then describe how it can be used at home!

Imagine you have a group who need to meet up every so often. Maybe you are a small team of ‘leads’ who sync up on high level topics every once in a while. Traditional uninspired office logic would dictate a standing weekly meeting. This is a TERRIBLE IDEA! Weekly meetings are the death of creativity and passion. Have you ever been to a meeting that seems like no one knows why it was actually called? Numbers to the rescue!

There are a ton of advantages here! To enumerate a few of them: 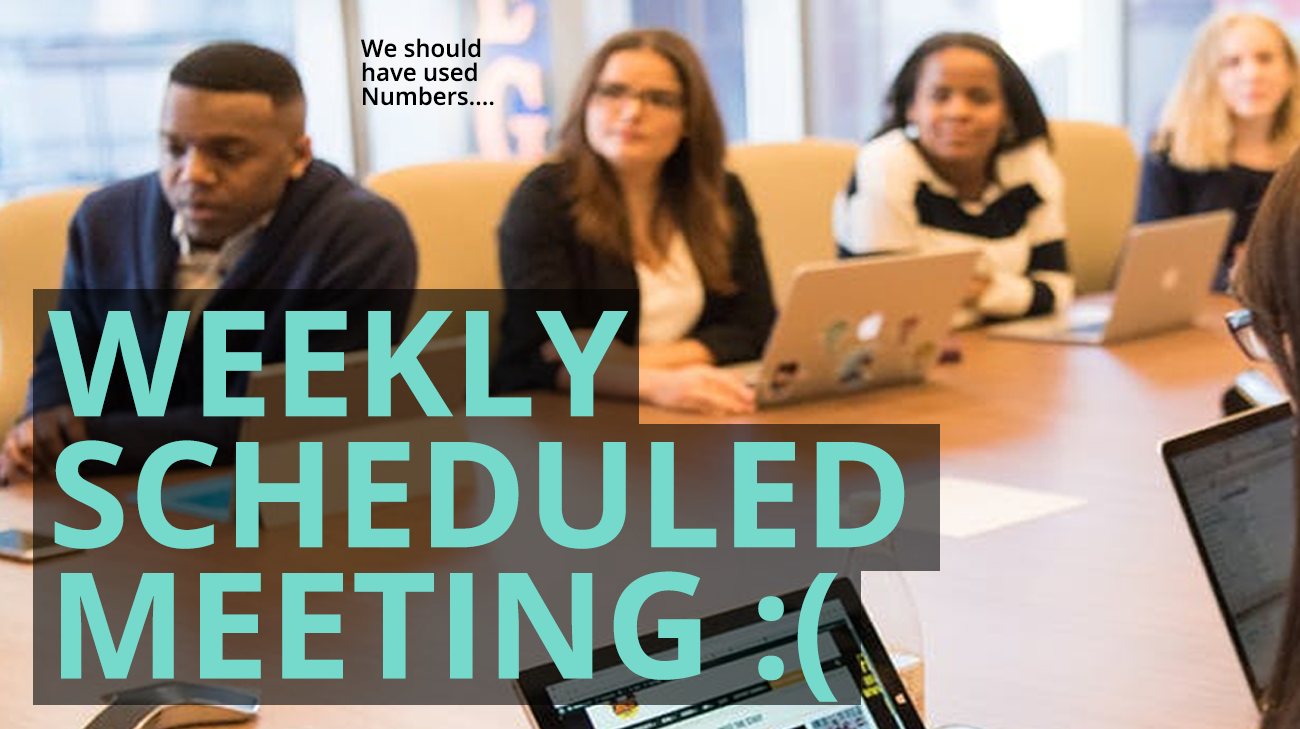 How to use it — The ‘Partner’ example:

I led with a business example but I’ve been evangelizing Numbers to friends and family and it’s become the go-to solution to tracking topics to chat about with the significant other for many people!

Assuming you don’t work together, the workday is an 8+ hour period apart. There might be HILARIOUS joke at work to retell or a story of an amazing design epiphany and often it’s easy to forget about it by the time dinner rolls around. By using numbers, both of you can feel more connected and lean less on our terrible short term memories!

How does this work in practice? 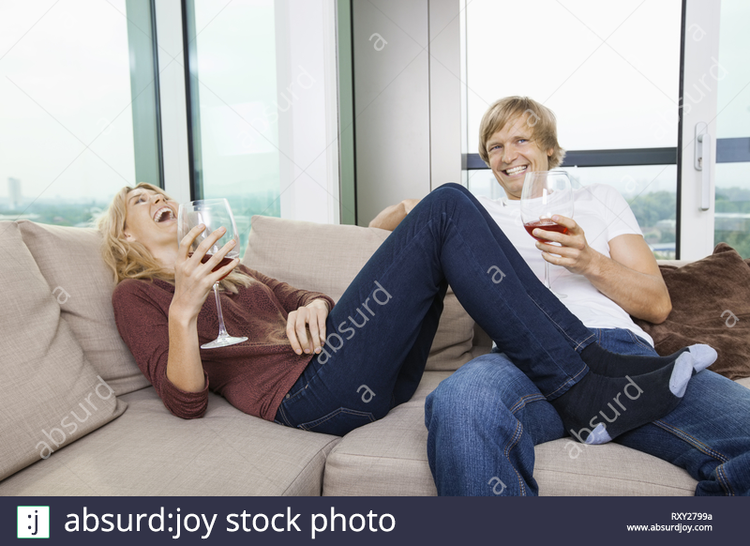 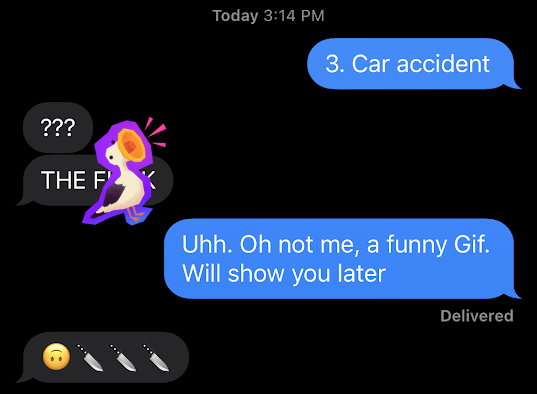 The examples above are illustrative but not an exhaustive list! At absurd:joy, we have a group chat among the core folks (myself, Cy, and Andy) where we throw our group Numbers as well as other chatter, but we *also* maintain numbered lists between each other. That means we have a Cy<->Alex direct message chat that contains numbers but also Andy<->Cy have a chat and Alex<->Andy have a chat that might have numbers! Some of these combos are rare depending on the work relationship and how often these combinations might need to have a 1-on-1 topic to discuss but who knows! The chat is always there just in case. 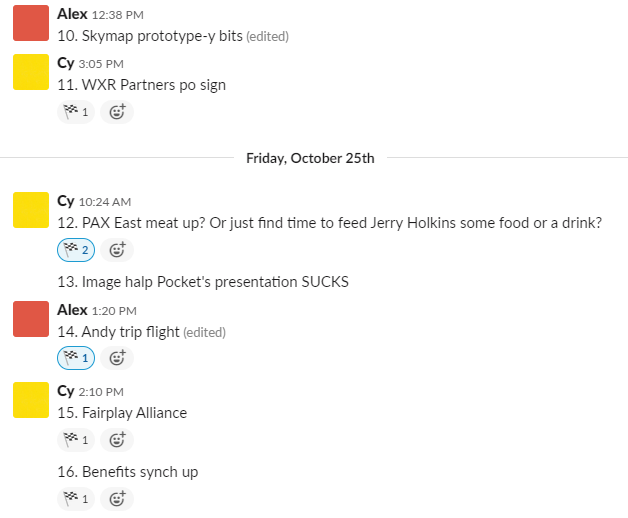 In particular Cy and myself co-run business operations so we have tons and tons of back and forth with vendors, business partners, etc which results in gobs of small interactions. One workday apart might result in 5 or 10 numbers.

And that’s it! Our brains are weak and our short term memories are terrible. Task tracking should be used for tasks but where do *you* currently write down “Remember to tell Vicky the funny story about X” or “Make sure to bring up topic Y next time we’re chatting”? Nowhere? Merge those into a task list? God-awful sticky notes?

Okay. Sure. We did just spend 3+ pages talking about a simple numbered list. In fairness, Numbers is the *agreement of how to use the list*, not the list itself.

Tracking topics to talk through is a nebulous concept that doesn’t have a nice, neat, designated place in our world. Ease your addled brain and accept Numbers into your life. Once you do, you’ll wonder how you operated before you adopted it! 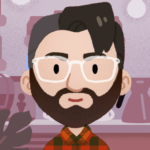 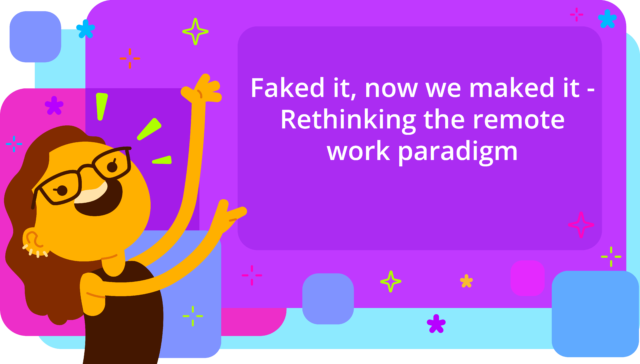 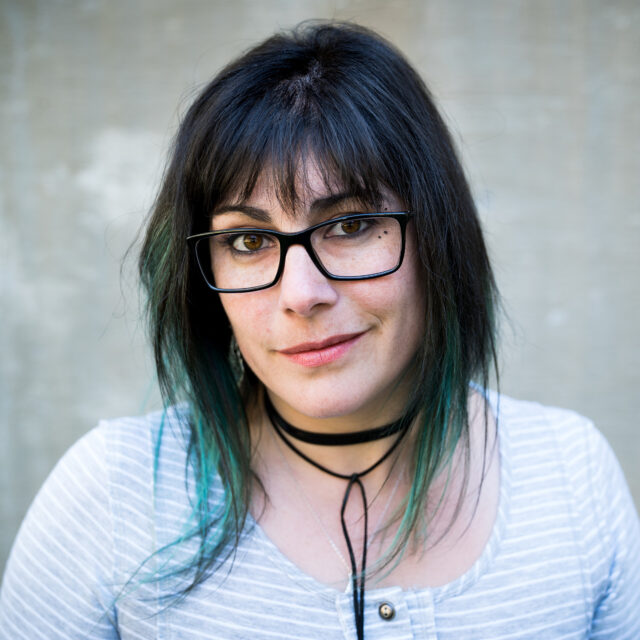 The Great Resignation & The Future Of Work: Cy Wise Of Tangle On How Employers and Employees Are Reworking Work Together 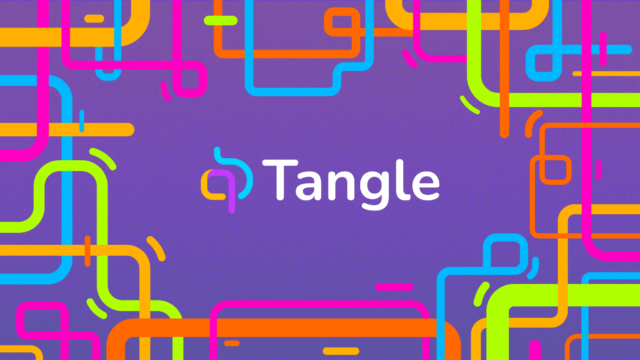 Absurd:joy launches early access for Tangle virtual collaboration platform and announces the closing of over $4 million of additional funding